Wish you were here!

Saturday morning we went for a walk on the rocky coast between Duino and Sistiana near Trieste and the Slovenia border. It is a small nature reserve with cliffs. Nature there is very different from what I am used to although the place is actually not far from where I live. Soil here is very rocky, rivers flows underground for kilometers, and there is a particular micro climate that allows mediaterranean plants to grow. Woodlands  are rich of holly oak (quercus ilex), acer monspessulanum, phillyrea and terebinth (pistacia terebinthus), which are plants that you normally don’t see here in the north of Italy. Going there feels like a very exotic and foreign place to me and it’s only one hour by car from home. 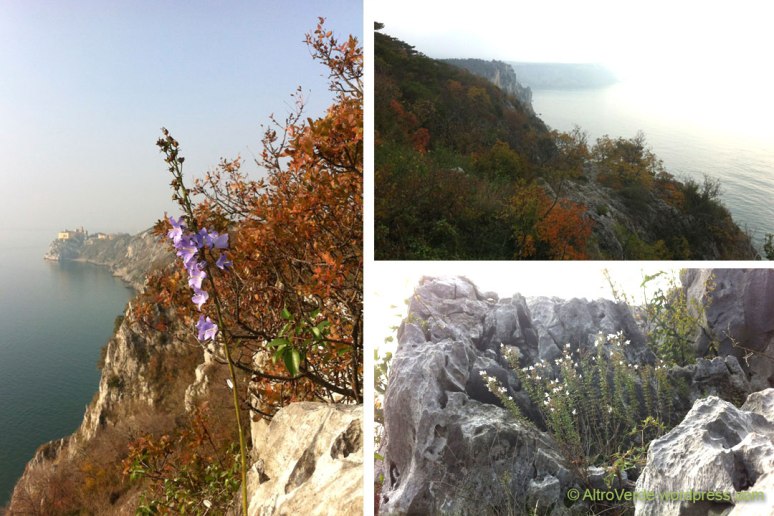 The weather was warm and still, the clouds merged into the sea. Pistacia and cotinus bushes set the cliffs on fire with their striking fall colours. Finally some nice autumn leaves to see and yet it didn’t feel like autumn at all! The sun filtered by the sky made me feel like I was dreaming.

A very easy and convenient path runs at the top of the cliffs from where you can keep an eye to the breathtaking view and an eye to the colourful and wild woodland and then you’d need another eye to watch where you step, but hey you can’t always be aware, can you? 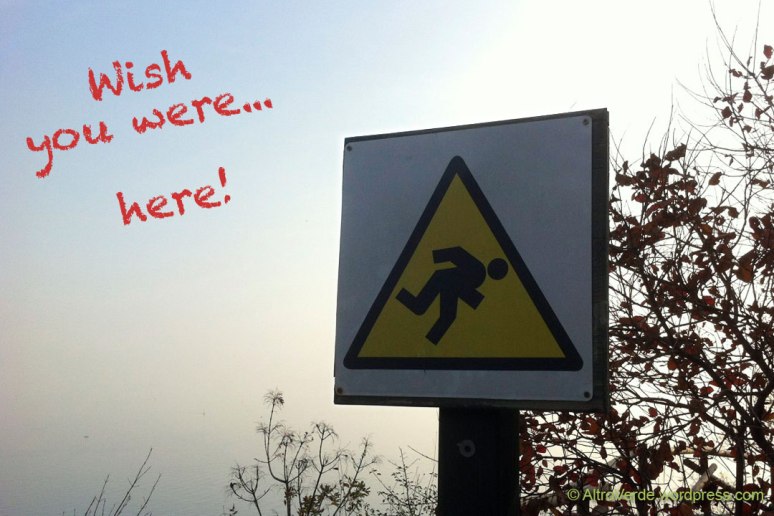 Anyway let’s get back to beautiful nature and colours and views, not everybody made it to the end of the walk but the World is bursting with people and fishes were hungry that day.

I named acer monspessulanum, which is actually very similar to acer campestre except it has three-lobed leaves and prefers milder climate than here. In fall it turns a beautiful bright orange instead of yellow.

Wild cotinus and ash trees made the rest of the colours, every single plant grew up despite rocks and salty winds and dry summers and you could see how difficult it would have been by looking at the odd shapes that every branch has. Even the stones seem carved by wind and sun.

At midday the sun looked as in late afternoon, this coast where used as a military watching point during the first world war but nowadays only touristic and private boats sail here.

After a while we reached the Sistiana harbor, the end of our journey. The place has that odd melancholy of summer crowded places, forgotten in a matter of months… until next spring. It felt so intimate.