I told you I had a plan. It worked in history, why shouldn’t it work in a garden?

My garden is already divided in sectors or large beds, since all of it is a total mess, I decided the best thing to do was to conquer it – sector by sector – and win my garden back again. Starting with the passageways. 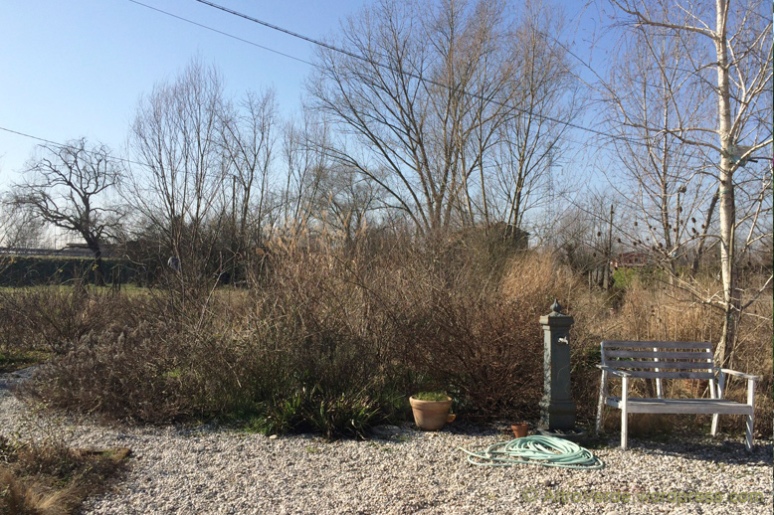 It’s a path I have to take at least once a day, normally on evenings, to take the kitchen waste to the compost leap, for example. It’s a simple path and it’s ‘floored’ with gravel, which glows a little, so most of the times I don’t even bring a torch with me and venture out in the gloom. You might not believe it, but several times I’ve been attacked by rose branches in the dark. I felt my trousers torn, my wrists and hands brushed with thorns; sometimes they even knock my hat off. 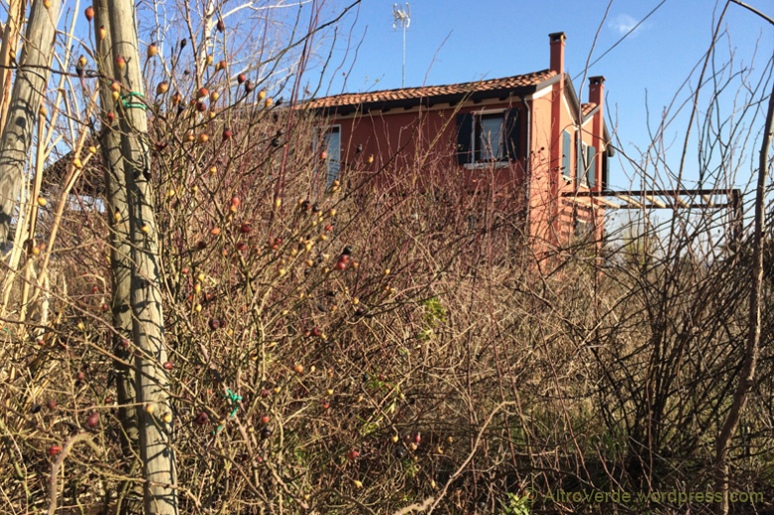 You may recognize the same vantage point of some nice pictures shown on my previous post, the one with all those lush roses in bloom. Here you can see them – at their worst! 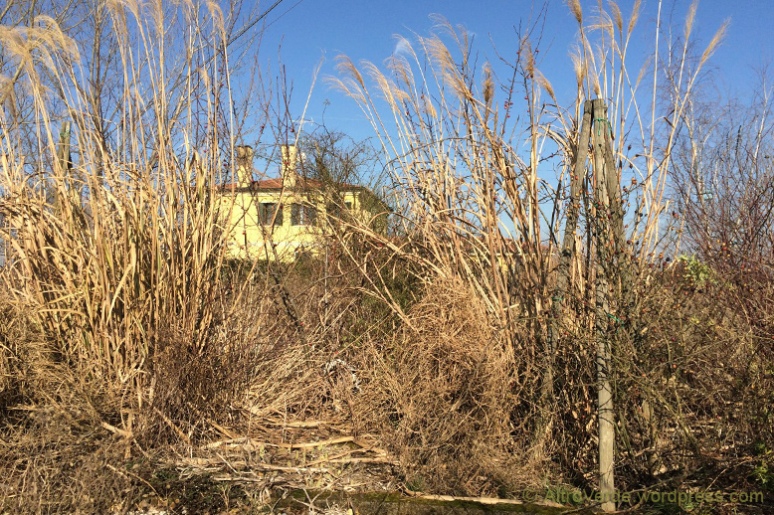 I took a class of rose pruning in Trieste a few weeks ago. The trainer was Maurizio Usai, an important garden designer in Italy; he’s a gardener and knows everything about roses. The course was very interesting, I knew most of the theory about pruning but actually never tried it on a plant. It gave me the self-confidence to start pruning.

It’s been sunny and rather warm outside, although all the mornings we still have frost. But it’s actually the seasonal standard. I took my leather gloves, my secateurs and some rope, an extra-large amount of energy and time was needed as well but the result fully satisfied my expectations. 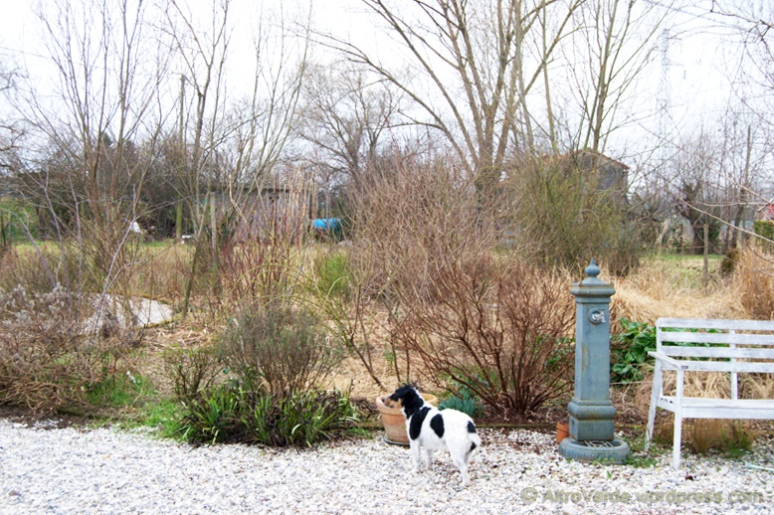 The crabapple bed is a rather large island between the grass garden and the rose garden. It includes obviously three young, but rather large, crabapple trees indeed (malus ‘Red Sentinel’) and a smaller purple-leaved one (malus ‘Coccinella’), a couple of tall miscanthus, a few other medium sized grass clumps, some perennials and roses. Roses here have been planted rather close to each other, because I wanted the effect of a large cushion of them and because actually I didn’t expect them to grow so fast and so big… 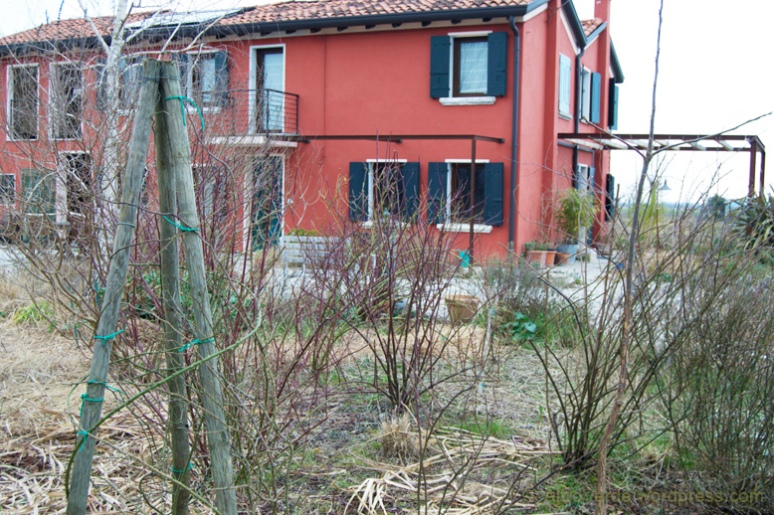 I have pruned the roses like I’ve never done before (of course, because I had never actually pruned them before!), starting with the dead canes, then the old canes and then shortening the big strong new branches to an imaginary shape level. I might have chopped more, maybe, but I didn’t feel that confident yet; let’s see how they react to this pruning and then I’ll have more confidence about how to proceed next year. Pruning roses is rather easy if you learn how to observe the rose’s growth: the plant suggests itself how to proceed. 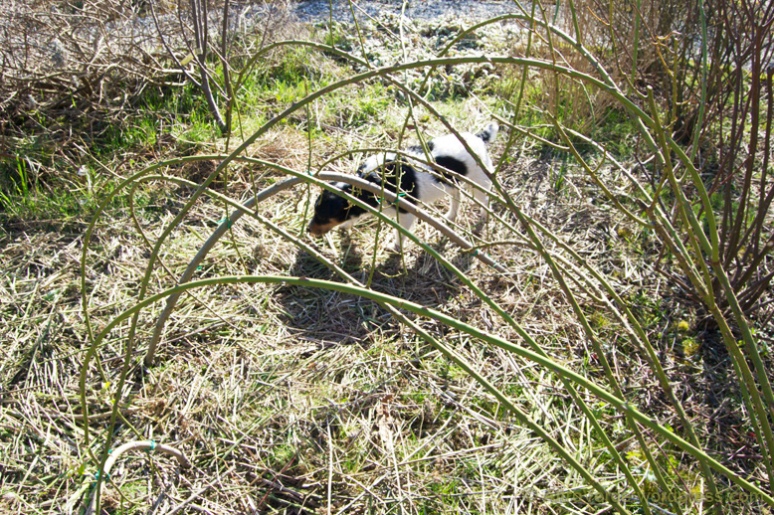 To give you an example, Adam Messerich is a bourbon rose that sends exuberant branches straight up to the sky. If you leave it that way you will see some flowers on the top of those branches… and not much else. After cleaning the plant from dead, weak and old branches, I took the young canes and tied them to a reversed ‘U’ I obtained from a willow branch. The result is a shorter plant with waving branches that will, hopefully, pruduce new branches from every bud and new blooms from every one of those new branches. I’ve been told not to peg down for more than a couple of years on any rose because it’s supposed to weaken the plant (but this is not really an issue with some plants, is it?).

Rudy and the cats liked the job I did and reckon it could become a nice pergola for them in the summer. Somehow I share the same feelings as my pets. 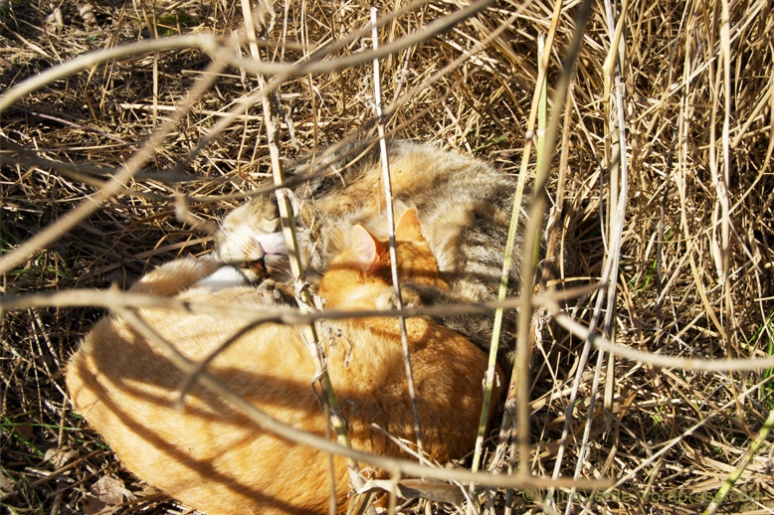 At the far corner of the crabapple bed there is the compost leap. As such, the path that leads there makes an ‘S’ with the crabapple bed on the right (sector won: Alberto-1, garden-0), and two large rose beds on the left. The first one was really bothering me. Last Spring it looked really good, although already a little messy and out of control – but at least bursting with blooms. 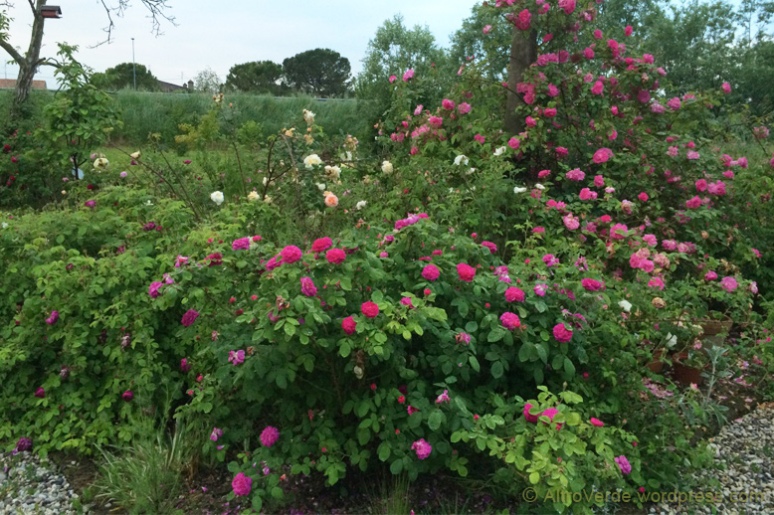 There are various roses here, mainly shrubs (there are Ombree Parfaite, the dark purple gallica I have posted lately) that lies all around a power pole on which a beautiful Zephirine Drouhin on one side, and a young, but exuberant Bobbie James on the other, climb and cover it up.

In the picture above you can see how that same rose bed looked before I laid my hands on it – and below, you see how it looks now (just a different point of view), after a whole day of hard work. 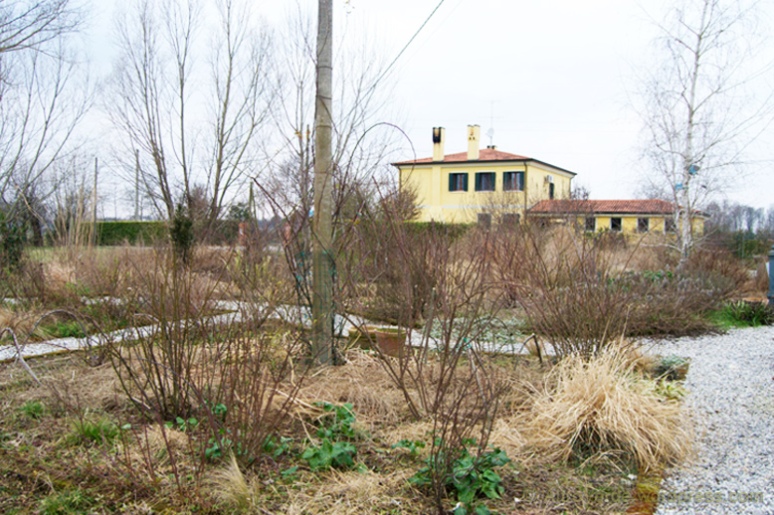 There is still a lot of work to do – but I guess the hardest part is the kick-start, then I will become more confident – plant after plant – and bed after bed. Now I have a big rose to train on the walnut tree… See you soon!

33 thoughts on “Divide and Conquer”